Eat Your Primary Sources! Or, Teaching the Taste of History

History has a distinct taste. Actually, it also has a distinct smell, feel, sound, and look to it but – as a historian of food and nutrition – I always find myself coming back to the taste of history. No, I’m not talking about the musty, acrid taste of dust and mildew as you open up a long neglected archival box or that weird metallic aftertaste you get after sitting in front of a microfilm reader for way, way too long. History can also taste like molasses, cloves, nutmeg, raisins. You know, the good stuff.

At least this is what I tried to prove to the students in History 3240: Food History at the University of Guelph this past semester. Not only did I want to teach them about the versatility of food history as an entry point into the history of science, immigration, colonialism and gender – not to mention business, environmental, or political history. But I also wanted to prove to them that, as budding food historians, they should always make sure to actually eat their primary sources.

For instance, while lecturing on the history of the Canadian home front during the Second World War ­– my own particular area of expertise – I tried to communicate some of the ways in which social class determined Canadians’ individual experiences of wartime rationing and shortages by presenting students with two cakes. In one unmarked container, students were offered Canada War Cake – one of the most popular wartime recipes for a sugar-stretching, eggless, milkless, and butterless cake – based on this March 1942 recipe from the Windsor Daily Star. In another container, I passed around a depression-era cake called Poverty Cake – also often known as Economy Cake or Depression Cake – from this March 1930 recipe featured in the Vancouver Sun. 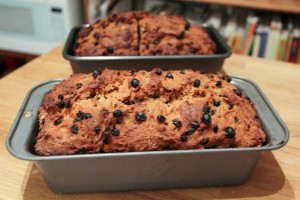 The point of the exercise was a rather simple one. The cakes, for all intents and purposes, taste and look almost exactly the same. When asked whether they knew which one was Poverty Cake and which one was War Cake, the class was divided because, really, there weren’t many tangible differences between the two. They were both tasty – if not a bit chewy – yet neither was particularly sweet or decadent. Instead, each tasted like a spiced, dense raisin bread. And both of them, I argued, told us something about the taste of war on the Canadian home front.

For those who had suffered from long-term unemployment and underemployment during the 1930s, for instance, War Cake likely had a decidedly familiar taste. In fact, my own research has shown that many of the so-called “War” recipes printed during WWII were – like War Cake – often indistinguishable from the Economy, Economical, Poverty, and Low-Cost recipes that filled Depression-era cookbooks and newspapers.  Such recipes therefore highlight the ways in which working-class and lower-income families didn’t experience wartime rationing or shortages as a particularly significant shift in their daily eating habits. They were already skilled in stretching dear or expensive ingredients like butter, sugar, tea, coffee, meat and preserves – the precise foods that were rationed in Canada during WWII – and were therefore well-prepared to make do with less of these items during the war in much the same way as they had for years. But for middle-class and wealthier families who had escaped the ravages of unemployment during the 1930s and therefore didn’t personally experience it as a decade of hunger and want, the war truly did require far more drastic cutbacks in the kitchen. War, for these families, really did taste a lot more like sacrifice and austerity and, to that end, it was a quite unique culinary experience that harkened back to the previous war far more than the hard years of the 1930s.[1] 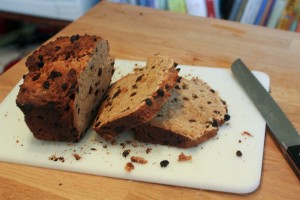 War or Poverty cake? (I honestly can’t remember which is which.)

Historical recipes, in other words, can often be fun, tasty and occasionally useful classroom props. But they can also teach students much more important lessons about the historian’s craft, particularly when the students, themselves, are the ones doing the cooking. That’s why I designed an assignment that required each student to give a five-or-so minute presentation on a recipe of their choice from one of the more than 13,000 cookbooks housed in Guelph’s fantastic Culinary Collection that, in some way, related to that particular week’s readings. In doing so, students would not only use the recipe to assess some of the broader themes that we were discussing in seminars – which ranged from “food and colonialism” to “industrial foodways” to “food, health and risk” – but I also asked that they spend some time discussing the challenges they faced while attempting to recreate their historical recipe of choice.

The students quickly learned that, while many of these old recipes could be quite delicious, they were also surprisingly difficult to recreate. Many of the nineteenth- and early twentieth-century recipes they found, for instance, often failed to include important information like – oh, I don’t know – how long to cook something for, what temperature to cook it at, how much a handful of sugar or a knob of butter might be, or what a slow oven refers to. And if students could actually read the handwritten recipes from old manuscript cookbooks, they often found that they were designed for kitchen equipment that no longer exists outside a museum or, in other cases, that our highly processed, standardized modern ingredients act nothing like their historical counterparts.

Ultimately, the most important lesson that the students seemed to come away with was that primary sources – whether recipes, letters or census tracts – need to be read carefully and with a decidedly critical eye attuned to the source’s particular historical context. Not only did they learn quite a bit about what different forms of culinary literature said about women’s lives, labour, and everyday life; the revolutionary impact of changing household technologies; or the industrialization of food and the transformation of print culture – but they also learned quite a bit about the limitations of primary sources more generally. When you misinterpret a recipe or fail to account for its historical idiosyncrasies, the result is immediate: the cake fails to rise, the meat is undercooked, or the soufflé collapses in on itself. When you fail to do the same for our reading of the census, on the other hand, the result is less immediately obvious but no less devastating: your data is simply wrong and your conclusions similarly turn out to be only half-baked.

Even more important, from my perspective at least, was that students really got in to the spirit of the assignment and gave some fantastic presentations. Whether it was the student whose exploration of a 1970s-era, back-to-the-land, foraging-themed cookbook led her out to a frozen pond digging up cat-tail roots (which tasted like muddy rope and provided her with about 1/20 of the calories that it took to harvest them) or another student who taught the class the hard lesson that the recipes in early twentieth century banana-advertising cookbooks had never been tested or tasted before going to print (a lesson that the still-lingering taste of sardine-banana salad will never let me forget), students managed to get into the spirit of things and bring the themes of the course to life. Here, for instance, is just one fun example that a student posted to YouTube:

Food, in other words, is not simply a great way to get students interested in history. As museum curators and public historians have long known, the sensory experience of history can sometimes be far more powerful and illuminating than the text-centric narrative structure that historians tend to rely upon. It’s therefore worth exploring the ways in which we can apply some of these lessons to both the classroom and our own scholarly research. As Joy Parr’s fantastic book Sensing Changes and its associated Megaprojects website have both shown in recent years, sensory history offers new vistas for historical analysis. It’s up to the rest of us to start to make the past more tangible and sensible in our own teaching, research, and writing.

[1] A much more nuanced version of this argument – using a much wider variety of sources! – will appear in my forthcoming book, Food Will Win the War: The Politics, Culture and Science of Food During Canada’s Second World War (Vancouver: UBC Press).

One thought on “Eat Your Primary Sources! Or, Teaching the Taste of History”